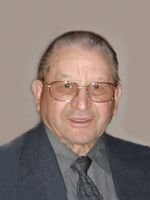 Mr. August Lorenz of Camrose formerly of Daysland, passed away on Friday, May 16, 2008 at the age of 83 years. He leaves to mourn his loving wife of 56 years, Leona; five daughters - Judy, Janice, Myrna (Clark), Meriel (Cecil) and Leslie (Ian); and five grandchildren: Jeffrey (Brandie-Lee), D.J. (Jessica), Lynette, Evan and Kennedy. August was also proud of his two great-grandchildren Emma and Declan. He was also looking forward to his 3rd great grandchild, due to arrive in early June. August was also survived by 3 sisters, Maggy, Carol and Matilda, and 2 brothers, Adolph and George, as well as numerous other relatives and friends. August was predeceased by one son-in-law Mike, in 2007. Prayer Services were held on Tuesday, May 20, 2008 at 7:00pm., from St. Francis Xavier Roman Catholic Church. Mass of Christian Burial was held on Wednesday, May 21, 2008 at 10:30am., from St. Francis Xavier Roman Catholic with Rev. Eduardo Escober as Celebrant. Interment followed in The Camrose Cemetery. If friends so desire memorial contributions are gratefully accepted to The Alberta Cancer Foundation, or to the charity of your choice.

A Memorial Tree was planted for August
We are deeply sorry for your loss ~ the staff at Burgar Funeral Home Camrose Ltd.
Join in honoring their life - plant a memorial tree

Share Your Memory of
August
Upload Your Memory View All Memories
Be the first to upload a memory!
Share A Memory
Plant a Tree