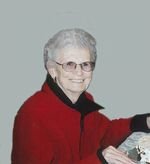 Mrs. Barbara Baird of Camrose, passed away on Sunday, April 20, 2008 at the age of 86 years. Barbara Baird was born in Gadsby, Alberta on May 14, 1921 to John and Harriett ("Hattie") Bradey. Barbara had three brothers "Kenneth" and "Ross" who both passed away in 1920 with scarlet fever and "Charles" who passed away in 1995. Barbara grew up in Gadsby but in 1929 she left Gadsby to go to work for Mr. Harry Webster in the Post Office at Red Willow, Alberta. While working for Mr. Webster she met Robert ("Bob") Baird whom she married on February 16, 1942 in Camrose, Alberta. They had two children, "Laurie" and "Suzanne". Bob and Barbara farmed in Red Willow until they moved to Camrose in 1972. During her years in Red Willow, Barbara was secretary for the "Red Willow Cemetery Club", an avid curler and secretary for the "Red Willow Curling Club", ;a member and secretary of the "Red Willow" Ladies Aid", and taught Sunday School until the church services in Red Willow ceased in 1968. In 1967 Barbara took over the Post Office in Red Willow and was "Post Mistress" until 1972 when they moved to Camrose. Bob and Barbara were married for 55 years. Bob passed away in 1997. Barbara was an avid sports fan and music lover. Barbara suffered from glaucoma for many years and in 1997 was declared legally blind. At that point and in the years to come she always said "Suzanne is my eyes". Barbara remained in her home until November, 2004 when she moved to her senior apartment at "Parkview Place" In November 2007 she was no longer able to stay in her apartment and was moved to St. Mary's Hospital waiting placement in Long Term Care. She stayed at St. Mary's Hospital from November, 2007 to the day of her passing. Barbara was predeceased by her parents, her husband Robert "Bob", and her 3 brothers Kenneth, Ross, and Charles. She is survived by her daughter Suzanne, her son Laurie (Dianne), 2 grandsons Alan and Kevin, her Sisters-In-Law Ruby Bradey and Margaret McCorkindale, and many nieces and nephews. Funeral Services were held on Friday, April 25, 2008 at 2:00pm., from The Burgar Memorial Chapel with Rev. Brian Hunter (St. Mary's Hospital Pastoral Care) officiating. Cremation followed the service. If friends so desire memorial contributions are gratefully accepted to the C.N.I.B., St. Mary's Hospital, or to The Alzheimer Society.

Share Your Memory of
Barbara
Upload Your Memory View All Memories
Be the first to upload a memory!
Share A Memory
Plant a Tree