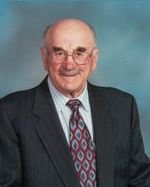 On Saturday. February 2, 2008 Alexander Wagner of Camrose passed away in Camrose at the age of 85 years. Alex was born in Kaukassus, Russia on May 14, 1922 to Jacob and Pauline Wagner and immigrated to Canada at the age of seven years. He grew up in Silver Grove, Saskatchewan where he later met Katie Lorenz. They were married on December 26, 1943 and farmed together in Barrhead, Alberta until returning to Camrose in 1986. They spent fifty-seven years together until Katie's passing in 2001. Alex will be deeply missed by his son Harvey (Edith) and their children Corinna (Rob), Sheldon, Jason (Roni) and Darren; daughter Carol (Warren) and their children Dara (William), Christy and Lori; son Ron (Annie) and their children Kevin (Angela), Michael (Brandi) and Travis; daughter Esther (Arvid) and their children Brigette and Kris (Veronica); daughter Rita and her children Janelle, Tyler and Cory. He also leaves 10 great-grandchildren and a special friend Pauline Gately. Alex is also survived by his brother Albert (Holdine); sisters Elsie Yarrow and Erna (Clem) Seutter; sisters-in-law Ida Wagner, Dianne Wagner and Emma (Jack) Beck; brother-in-law Albert (Ilene) Lorenz and numerous nieces and nephews. He will also be missed by the many friends he made in his last years at the Grand Trunk Landing condos in Camrose. Alex was predeceased by his wife Katie; son Wil; parents Jacob and Pauline; four sisters in infancy; sister Bertha and two brothers Robert and Len. Alex will be remembered as a terrific dad, grandpa, great-grandpa, brother, uncle and friend to many. He was an avid fisherman, hunter and farmer and had a knack for doing any jobs that needed doing. Alex's love for carpentry carried on through retirement and he made many beautiful wooden keepsakes. His gift of story telling and his sense of humour will stay in our memories. He loved God with all of his heart and lived by his beliefs to be an example for us all. Funeral Services were held on Tuesday, February 12, 2008 at 10:00 a.m. from the Camrose Church of God, Camrose, AB with Pastor Brian Krushel officiating. Interment followed in the Manola Cemetery, Barrhead, AB. Memorial contributions may be made in memory of Alex to the Deer Valley Meadows Retreat Centre at Alix, AB or to Giddions. The family expresses their gratitude for your kindness in honouring our wonderful father, Alex Wagner.

Share Your Memory of
Alexander
Upload Your Memory View All Memories
Be the first to upload a memory!
Share A Memory
Plant a Tree