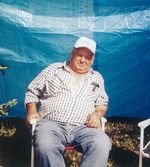 Mr. John Peter Wolokoff was born on October 4, 1940 at home to Tom and Nellie Wolokoff of Daysland. He passed away suddenly at the Royal Alex Hospital in Edmonton on Thursday, January 24, 2008 at the age of 67. John attended Quarrel School until grade 8 then went to Daysland. After working on the railroad for a short two weeks he came home and told his dad he wasn't leaving the farm again. He met his wife Mary Anne at his cousin's wedding. He was a groomsman, she was a bridesmaid. They were married on November 8, 1969 and were blessed with two sons, Brad and Dale and two daughters Polly and Shelley. Right after their wedding they moved to the home place and started farming. Farming was John's first passion. He liked nothing better than driving around the country checking out crops and cattle, having coffee with the neighbours or if he couldn't do that, getting on the phone and discussing the pros and cons of farming. Sometimes his body would slow down but his love for farming kept him going. His second passion was his grandkids. They always brought a sparkle to his eye and he spoiled them with treats that were always on hand. You could see them following him around whenever they were visiting the farm. John will be remembered by his loving wife Mary Anne; two sons Brad (Brenda) Wolokoff of Ardrossan and Dale (Lynette) Wolokoff of Red Deer; two daughters Polly Wolokoff of Fort Saskatchewan and Shelley Wolokoff of Millet; six grandchildren Justin, Brady, Blaine, Brooke, Jenna and Courtney Wolokoff. John is also survived by his brother Jack (Myrna) Wolokoff of Camrose; two sisters Marlene (Irvin) Miciak of Sherwood Park and Irene (Roy) Bevans of Chilliwack, B.C.; one sister-in-law Lilly Wolokoff of Daysland as well as numerous nieces, nephews, relatives and many friends. John was predeceased by his parents Nellie and Thomas Wolokoff; one brother Ed Wolokoff and one nephew Terry Wolokoff. John touched many lives because of his gentle nature and willingness to chat any time, any place. He will be greatly missed by all who knew him. Prayer Services were held on Sunday, January 27, 2008 at 7:30 pm., from Our Lady of The Prairies Roman Catholic Church in Daysland. Mass of Christian Burial was held on Monday, January 28, 2008 at 11:00am., from Our Lady of The Prairies Roman Catholic Church in Daysland with Rev. Larry Pederson as Celebrant. Interment followed in The Daysland Cemetery. In lieu of flowers memorial contributions are gratefully accepted to The Alberta Diabetes Foundation, The Arthritis Society, or to the charity of your choice.

Share Your Memory of
John
Upload Your Memory View All Memories
Be the first to upload a memory!
Share A Memory
Plant a Tree