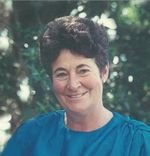 Doreen Theresa Weller was born to Mamie and Joe Wolbeck on the farm at Heisler on March 3, 1932. She passed away suddenly on December 30, 2007. Doreen married Roger Weller on October 27, 1952 and they moved to the Weller farm. Doreen's greatest loves were Roger, her children, her grandchildren, and the farm. Between milking cows, tending the chickens, and raising four children, Doreen worked very hard on the farm at making a go of things. In her early years, Doreen was an avid volunteer in the community with the Spring Lake CWL, the baseball team and working at the Daysland Arena concession. Doreen lived on the farm until December 26, 2002, when, for health reasons, Roger and Doreen moved to Providence Place. Her heart, however never left the farm. She loved her frequent drives year round to the farm to check crops, cattle, or baby calves. Doreen loved to talk to people, and was always keen to learn where they came from or what they did. Doreen took pride in her children and got updates either with early morning phone calls to hear what they were doing or by driving to the farm. She truly loved her grandchildren, and showed great interest by asking what was new in their lives. Her grandchildren knew she loved them. She will be missed by all of us in our own special way. Doreen leaves her loving husband Roger, four children: Brenda (Wayne), David (Peggy), Jane (Dale), and Jim (Jacqueline); six grandchildren: Amie, Kevin, Colin, Nicole, Justin, and Sydney; two brothers, Melvin (Kay) Wolbeck and Lloyd (Eileen) Wolbeck, as well as one sister, Caroline (Wilfred) Volk. Doreen was predeceased by her parents and son-in-law, Dwayne Moren. Mass of Christian Burial was held at 10:00 a.m., Thursday, January 3, 2008 from Our Lady of the Prairies Roman Catholic Church in Daysland with Rev. Larry Pederson as celebrant. Interment followed in the Daysland cemetery. Memorial contributions are gratefully accepted to the Alberta Cancer Foundation c/o the Cross Cancer Institute, S.T.A.R.S., or to the charity of your choice.