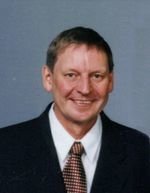 Mr. Barry Boyko of Drumheller passed away on Wednesday, December 26, 2007 at the age of 58 years. Left to cherish his memory are his loving wife; Lil, his two sons; Kelly(Sharla) of Drumheller, Jaime of Drumheller, and his two grandchildren; Talyn and Kya. Barry is also survived by his father Art of Camrose, one brother; Kevin (Michelle) of Camrose, his sister; Karin (Lee) Naslund of Camrose and his neices and nephews; Amy, Nikky, Serge, and Sloan. Barry was predeceased by his mother; Pat, his aunt Gussie, and his uncle; Henry. Prayer Services were held on Monday, January 7, 2008 at 7:00pm., from St. Francis Xavier Roman Catholic Church. Divine Liturgy was held on Tuesday, January 8, 2008 at 10:00am., from St. Francis Xavier Roman Catholic Church (5010 - 48a Ave. Camrose) with Rev. Vasyl Nykyforuk officiating. Interment followed in The Camrose Cemetery. In memory of Barry's mother Pat Boyko, memorial contributions are gratefully accepted to The Alberta Cancer Foundation or to the charity of your choice.

Share Your Memory of
Barry
Upload Your Memory View All Memories
Be the first to upload a memory!
Share A Memory
Plant a Tree