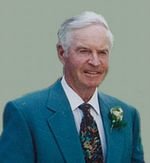 Lyle Norman Bowie was born on the farm at Rosalind on January 27, 1927 to George and Ida Bowie. Lyle passed away on Thursday, December 13, 2007 in Camrose at the age of 80 years. On October 14, 1948 he married Phyllis Weller. They resided on the home farm south west of Rosalind until 1977, and raised four children: Barry (Donna) Bowie of Rosalind, Suzanne (Leon) Ramstad of Bashaw, and Debbie (Greg) McMann of Camrose. Lyle had seven grandsons, three great-grandsons and five great-granddaughters. He was predeceased by his son Robert "Bobby" and his sister Bernice Kercher. Lyle had a very busy life farming, playing ball, hunting, fishing and curling. In his later years, watching all sports was his passion. In 1977 Lyle and Phyllis moved to Bashaw to help run and later took over Max's Drive Inn. At this time Lyle was partners in a cattle operation. This became Lyle's life, looking after cattle, building the farmsite and running the operation. Lyle was on the Hospital Board for 9 years, was County Councillor for three years and a Elks member for 61 years. Lyle dealt with Parkinsons for 29 years. In the last years he had excellent care at Bethany Meadows. He is now at peace and we will miss him dearly. Mass of the Resurrection was held on Monday, December 17, 2007 at 11:00 a.m. from St. Francis Xavier Roman Catholic Church with Rev. Eduardo Escober as celebrant. Inurnment followed in the Melville Cemetery (Kelsey, Alberta). If friends so desire memorial contributions may be made to the Parkinson's Society of Alberta, The Bethany Group, or a Charity of your choice.

Share Your Memory of
Lyle
Upload Your Memory View All Memories
Be the first to upload a memory!
Share A Memory
Plant a Tree