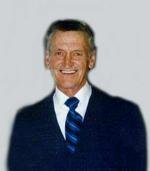 Mr. Kenneth Loesch of Daysland passed away on Sunday, April 18, 2010 at the age of 80 years. Left to cherish his memory are his loving wife Margaret, children Mark (Bonnie) of Grande Prairie, and Brad (Sherry) of Daysland,and six grandchildren. He is also survived by one brother Dennis (Pat) of Daysland, and sister Joan (Stan) Erickson of Daysland. Ken was predeceased by his mother and father, one sister Orena, and two brothers Bill and Gordon. A prayer vigil was held on Friday, April 23, 2010 at 7:00 p.m. at Our Lady of the Prairies Roman Catholic Church in Daysland. A Memorial Mass was celebrated on Saturday, April 24, 2010 at 2:00 p.m. from Our Lady of the Prairies Roman Catholic Church Daysland with Rev. Leon Kler as Celebrant. Inurnment will take place in the Daysland Cemetery. If friends so desire memorial contributions are gratefully accepted to The Alberta Cancer Fund, The Daysland Hospital Foundation, or the Sunbeam Drop-in Center.

Share Your Memory of
Kenneth
Upload Your Memory View All Memories
Be the first to upload a memory!
Share A Memory
Plant a Tree