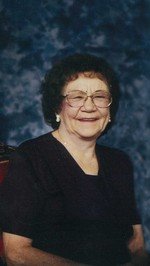 Ann Gabruck of Daysland passed away on Thursday, April 8, 2010 peacefully at the age of 80 years surrounded by her family. She is survived by her loving husband Stanley and six sons - Donald (Diane) of Keoma, AB, William (Betty) of Edmonton, Kenneth (Alex Ann Mulner) of Lethbridge, Robert (Liz) of Killam, Terrance of Daysland, and Richard (Cecilia) of Sherwood Park. She is also survived by three sisters Olga (Joe), Alexis (Rudy), Margaret (Brian) and one brother Kenneth (Laura). She is also survived by many grandchildren, great grandchildren, nieces and nephews. She was predeceased by her parents Edward and Rose Rogoski, one sister Helen and two brothers Stanley and Albert. A Prayer Vigil was held on Monday, April 12, 2010 at 7:00 p.m. from Our Lady of the Prairies Roman Catholic Church Daysland. A Mass of Christian Burial was held on Tuesday, April 13, 2010 at 10:30 a.m. from Our Lady of the Prairies Roman Catholic Church Daysland with Father Leon Kler as Celebrant. Interment followed in the Daysland Cemetery. Family members wish to express their sincere thanks to the Doctors and staff at the Daysland Hospital for their loving care during her stay in the Hospital. In lieu of flowers, donations can be made to the Daysland Hospital Foundation or the charity of one's choice.

Share Your Memory of
Anna
Upload Your Memory View All Memories
Be the first to upload a memory!
Share A Memory
Plant a Tree