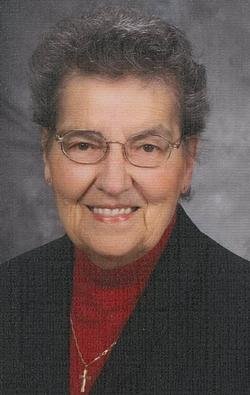 Ruth Oine Hagen (nee McFarlane) went to be with her heavenly father on Sunday, February 25, 2018 at the age of 96 years after a period of declining health. She was born April 30, 1921 to Jim and Carrie McFarlane on the family farm near Gronlid, Saskatchewan. Ruth was the second child and only girl of the family, having three brothers, Eugene, Leonard, and Glenn. As a child she was expected to help with farm chores and housework. She became very proficient at sewing and gardening, skills which she carried throughout her life. At the age of thirteen she was confirmed in the Lutheran Church. She attended SLBI (or the future LCBI) in Outlook. After graduation and further secretarial training in Saskatoon, she returned to SLBI and became the school secretary, with full responsibility for running the "Sunday School by Mail" program. While at Outlook, she met the love of her life, Arnold Hagen. They were married August 21, 1946 and moved to Saskatoon where Arnold attended seminary. While in Saskatoon, Ruby, Daniel, and David were added to the family. Upon Arnold's graduation, they moved to Prince Albert where Joy was born. In 1952, they moved to Vancouver to pastor at First Lutheran Church in Vancouver. During their ten year stay in Vancouver, Crystal and Philip joined the family which made for a very busy household. After Arnold's call to CLBI in 1962, the family moved to Camrose where they have resided up to the present. In order to help with finances, Ruth worked at Woolworth's, Bethany, and finally the Camrose Color Center. The skills acquired while living on the farm proved useful while managing the family, an outside job, and participating at CLBI. Upon Arnold's retirement, they traveled to many countries and destinations, often in the line of ministry. Ruth was a devoted Christian wife, mother, grandmother, and great-grandmother but the most important part of her life was her relationship with Jesus. She is remembered for being a prayer warrior. Arnold and Ruth were married for 68 years, until Arnold's passing in 2014. She leaves behind her six children Ruby and Dennis Knudtson, Daniel and Audrey Hagen, David and Sheri Hagen, Joy and Orville Evenson, Crystal and Doug MacKay, and Philip and June Hagen, twenty-one grandchildren with their spouses, and forty great-grandchildren. Predeceasing her were her husband Arnold, her parents Jim and Carrie McFarlane, brother Leonard McFarlane, and in-laws Bernice McFarlane, Irene Hagen, Rose and Ken Arnstead, Lloyd and Ida Hagen, Norman Salte, and Orville Pederson. Ruth's last years were spent at Bethany Meadows Care Home where the staff, home care, and Dr.'s Hilderman and Slabbert took such great care of her. Crystal MacKay spent numerous hours feeding, reading, talking and praying with and attending to our mother. A Funeral Service was held at 1:00 p.m., Friday, March 2, 2018 from the Messiah Lutheran Church with Rev. Rob Lewis officiating. If family and friends so desire, memorial contributions are gratefully accepted to the Canadian Lutheran Bible Institute (CLBI) or to the World Mission Prayer League (www.wmplcanada.org). The family would like to thank Dr. Hilderman, Dr. Slabbert and Homecare Nurse Janet Mcgeer, as well as the staff at Bethany Meadows, for the wonderful care their mother received.

Share Your Memory of
Ruth
Upload Your Memory View All Memories
Be the first to upload a memory!
Share A Memory
Plant a Tree