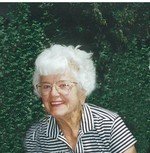 Mrs. Vera (nee Christenson) Meyers of Camrose passed away on Friday, November 20, 2009 at the age of 89 years. Left to cherish her memory are her children Phyllis Haselgruber (Rupert) of Kingman, Lester Christenson of Kingman, Glennice Franklin of Drayton Valley, Colin Christenson of Camrose and Colleen Brasco (George Chappell) of Ardrossan; 7 grandchildren and 10 great-grandchildren. She was predeceased by 1 grandchild, 3 brothers, 1 sister, her first husband Clifford Christenson and her second husband Edward Meyers, 1 son-in-law George Franklin, and one daughter-in-law Carol Christenson. Funeral Services were held on Tuesday, November 24, 2009 at 1:00 p.m. from the Burgar Memorial Chapel (4817 51 Ave, Camrose). Interment followed in the Kingman Cemetery. If friends so desire memorial contributions are gratefully accepted to The Alzheimers Society, The Bethany Group or the charity of one's choice.

Share Your Memory of
Vera
Upload Your Memory View All Memories
Be the first to upload a memory!
Share A Memory
Plant a Tree