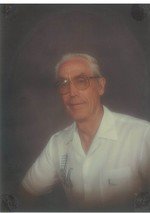 Mr. Sigurd Emil Mandseth of Camrose passed away on November 7, 2009 at the age of 82 years. Sig is survived by his loving wife Anna; children Jim (Karen) of Camrose, Jon (Cindy) of Leduc, Judy (Frank) Walker of Edson, Linda (Frank) Fletcher of Drayton Valley, and Randy (Kathy) of Leduc. He is also survived by 14 grandchildren and 11 great-grandchildren. He was predeceased by his infant son Wayne Allan, and brothers Ed, Rolf, Gunnar, Carl, and Olaf. Funeral services were held at 1:00 p.m., Monday, November 16, 2009 from the Burgar Memorial Chapel (4817 51 Ave) with Rev. Brian Hunter officiating. Inurnment followed in the Camrose Cemetery. If friends so desire memorial contributions are gratefully accepted to S.T.A.R.S or the charity of one's choice.

Share Your Memory of
Sigurd
Upload Your Memory View All Memories
Be the first to upload a memory!
Share A Memory
Plant a Tree