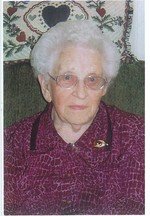 Esther was born to Anna and Daniel Anderson on April 6, 1906 in Gullnas Grycksbo , Sweden. In 1907 Anna and Esther moved to Nebraska, U.S. to join Daniel where he was working as a blacksmith. Esther was blessed with seven younger siblings: Carl, Viva, Albert, Elsie, Daniel, Violet, and Arvid. In 1912 the family moved to Canada, settling in Norquay, SK. where Daniel continued to do blacksmith work. After a time he ventured into farming and Esther worked along side her dad helping with any number of farm tasks. In 1929 Esther married Arvid Dahlin. Together they farmed in the Norquay area for many years. They had four children: Widmer, Arlene, Arnell and Joye. In 1963 Esther and Arvid moved from their farm to Prince Albert, SK where they worked at the Covenant Bible School; Esther as cook and Arvid as custodian. Esther continued to share her cooking and baking skills at the school after Arvid passed away on June 4, 1964. In 1968 she moved to Alberta where, in her words, she "worked here and there". From 1973 to 1983 she worked for Paul Zimmerman on his farm in the Kelsey, AB area. Esther was never idle. She was known not only for her skills in the home and kitchen but for the things she crocheted . She made many colourful things, among them were: pot-holders, afghans, tablecloths, doilies, mittens, scarves and slippers. After being a widow for nineteen years, Esther married Paul Johnson on Oct. 1, 1983. Esther and Paul lived in Langley, BC and were married seven happy years before Paul passed away on June 10, 1991. After some time Esther made the hard decision to leave Langley to move to Camrose to be closer to her children and their families. Esther lived at Rose Alta Lodge, Camrose before a downturn in her health in 2007. After a hospital stay at St. Mary's in Camrose she moved to Aspen Cottage where she received the best of care until her passing on October 29, 2009. Esther was predeceased by her parents Daniel and Anna Anderson, daughter Joye on April 15, 1947, husband Arvid on June 4, 1964, siblings Albert Anderson, Carl Anderson, Elsie Johnson, and Arvid Anderson, second husband Paul Johnson on June 10, 1991, son Widmer on March 5, 1992, step-son Donald on June 6, 2001. Esther is survived by daughter Arlene Dueck, son Arnell Dahlin and daughter-in-law Greta, daughter-in-law Edna Dahlin, nine grandchildren, nineteen great-grandchildren, step-children Janis & Ray Martyn, Dale and Elsie Johnson, Gerald and Barb Johnson, Geraldine and Wayne Wiebe and Dennis Johnson, seven step-grandchildren, eight step-great-grandchildren as well as siblings Denny Anderson, Viva Johnson, and Violet Paterson. Funeral services were held at 2:00 p.m., Wednesday, November 4, 2009 at The Messiah Lutheran Church in Camrose with Rev. Kenn Ward officiating. A Memorial Service was held at 2:00 p.m., Monday, November 9, 2009 at The Evangelical Covenant Church in Norquay, Saskatchewan. Inurnment followed in the Norquay Cemetery. In lieu of flowers memorial contributions may be made to Bethany Meadows - Aspen Cottage, 4209-55 Street, Camrose, AB T4V 4Y6.

Share Your Memory of
Esther
Upload Your Memory View All Memories
Be the first to upload a memory!
Share A Memory
Plant a Tree