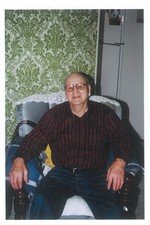 Mr. Arnold Hoem of Camrose formerly of Bawlf, passed away on Friday, October 30, 2009 at the age of 90 years. Left to cherish his memory are his loving wife Emma, and his daughter Shelley (Robin) Hoem-Neufeld of Red Deer. Arnold is aso survived by his two granddaughters Christie (Ron Dyck) Hoem-McNall, and Becky Hoem-McNall. He was predeceased by his parents, one brother Henry and two sisters Gladys and Oline. Funeral services were held on Wednesday, November 4, 2009 at 1:00pm., from The Burgar Memorial Chapel with Rev. Calvin Skriver officiating. Interment followed in The Camrose Cemetery. If friends so desire memorial contributions are gratefully accepted to The Heart and Stroke Foundation or to the charity of your choice.

Share Your Memory of
Arnold
Upload Your Memory View All Memories
Be the first to upload a memory!
Share A Memory
Plant a Tree