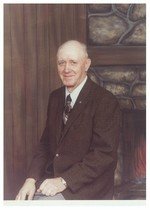 Mr. Arthur Grahn of Camrose, Alberta passed away on October 27, 2009 at the age of 88 years. He is survived by his loving wife Ida; children Sherry Pinter of Camrose, Brian (Louise) Grahn of Spruce Grove, Judy (George) Klassen of Summerland, Valerie (Lyle) Haverland of Houston B.C., Terry Grahn of Camrose, James (Barb) Grahn of Sherwood Park, Jean (Rudy) McDowell of Dominican Republic; 15 grandchildren; and five great-grandchildren. He is also survived by one brother Alf (Connie) Grahn of Camrose. He was predeceased by four brothers Oscar, Edgar, Ted, and Cliff; two sisters Ellen Rogstad and Alice Skalin. Funeral services were held at 1:00 p.m., Friday, October 30, 2009 at the Burgar Memorial Chapel (4817 51 Ave) with Rev. Murray Cowan officiating. Inurnmnet followed in the St. Joseph's Cemetery. If friends so desire memorial contributions are gratefully accepted to The Diabetes Association or the charity of one's choice.

Share Your Memory of
Arthur
Upload Your Memory View All Memories
Be the first to upload a memory!
Share A Memory
Plant a Tree