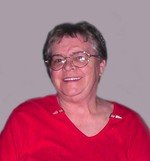 Mrs. Jane Courchene of Camrose passed away on Saturday, June 20, 2009 at the age of 69 years. Left to cherish her memory are her children: Clifford of Spruce Grove, Carla Harris of Camrose, Bernie of Red Deer, and Rhonda (Doug) Jacobs of Killam; as well as seven grandchildren: Jenise, Solange, Lizette, Jennifer, Trevor, Jason and Daniel. She survived by two brothers Perrie and Kelvin; and six sisters: Lorette, Ferne, Terry, Marian, Judy and Myra. She was predeceased by her husband Lawrence. A prayer service was held at 7:00 p.m., Tuesday, June 23, 2009 from the Burgar Memorial Chapel (4817-51 Ave.) Mass of Christian Burial will be held at 2:00 p.m., Wednesday, June 24, 2009 from St. Francis Xavier Roman Catholic Church with Rev. Eduardo Escober as celebrant. Inurnment will follow in the Camrose Cemetery. Memorial contributions are gratefully accepted to the Easter Seals.

Share Your Memory of
Jane
Upload Your Memory View All Memories
Be the first to upload a memory!
Share A Memory
Plant a Tree