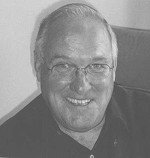 Mr. Malcolm "Mac" Hancock of Camrose passed away on Thursday, January 29, 2009 at the age of 72 years. Mac was born in Islay and grew up in Marwayne. After graduating from the Vermilion School of Agriculture in 1955, where he met Bernice, he enjoyed a lengthy career with the Alberta Wheat Pool before retiring in 1993. He passed away suddenly while on vacation at Maple Bay, BC. Mac is survived by his loving wife of 51 years Bernice (nee Koetke); four children: Kelly (Kim), Wendy, Brad (Darcy) and Scott; and five grandchildren: Meagan, Kelsey, Danelle, Cody and Jennifer. Mac also leaves four remaining siblings: Doreen, Don (Fern), twin sister Marion, and Ted (Audrey); sister-in-law Gloria (Bob); and numerous endeared nieces and nephews. He was predeceased by parents Ruth and Clarence, brothers Gordon and Neil, and brothers-in-law Al and Murray. A funeral service was held on Monday, February 9, 2009 at 1:30 pm from the Camrose United Church (4829 50 Street, Camrose) with Mary Ann Pastuck and Rev. Brian Hunter (St. Mary's Hospital Pastoral Care) officiating. Cremation has taken place. In lieu of flowers, memorial donations are gratefully accepted to the Heart & Stroke Foundation of Alberta (10985 124 Street Edmonton T5M 0H9), or the Juvenile Diabetes Foundation (400 First Edmonton Place, 10665 Jasper Ave, Edmonton T5J 3S9).

Share Your Memory of
Malcolm
Upload Your Memory View All Memories
Be the first to upload a memory!
Share A Memory
Plant a Tree