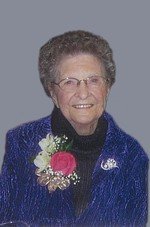 Please share a memory of Frances to include in a keepsake book for family and friends.
View Tribute Book
Mrs. Frances Grettum of Camrose, passed away on Monday, December 1, 2008 at the age of 94 years. Frances Mildred Courtney was born in a log house in the Sandstorm district, near Holden, on August 19, 1914. She was the fourth child of Thomas and Bertha Courtney. She moved to Camrose in 1931 and worked for various people where she made many long lasting friendships. She married Bob Grettum on December 27, 1938 in a double wedding ceremony with her sister Vera at her parent's home near Ponoka, Alberta. She had seven children, 17 grandchildren and 15 great grandchildren with another due in December. She was a sweet, caring person who made people of all ages feel very special and welcome. She worked hard, was a wonderful cook and could whip up a meal out of almost nothing in no time at all. Almost every Sunday her house was full of people who devoured her buns and cinnamon buns and delicious meals. She always had a great selection of pies and if someone mentioned another kind, she would make sure that they got it the next time. Her passion was playing cards, but was always the first to try to include someone who was not in the game and would willingly give up her seat so they could play. Her love of music was passed on to her family; she was adept at playing the piano by ear and taught all her kids to dance. She loved writing poems, making wedding shower books, rug hooking and doing crosswords. She enjoyed being in the W.I. and in various church and community activities. Every one of her grandchildren thought they were her favorite, and she catered to every tastebud. Her many nieces and nephews were treated as her own and it was not unusual to find teenagers in her kitchen who would stop in for a visit. We will always remember her beautiful smile, nonjudgemental disposition and witty sense of humor, even to the end. She is survived by her loving husband Bob; children: Velma (Terry) Steere, Clarene (Dennis) Matthews, Verny (Ken) Cox, Delphine (Bruce) Olesen, Keitha (Neil) Cunningham, Kendall (Eunice) and Winston (Monika); grandchildren: Terrance, Carolyn and Johnathan; Leslie, Bobby and Delphine; Lorraine and Rusty; Darin and Lisa; Susan and Karyn; Tanis and Devon, Nicholas and Thomas and their families; great grandchildren; Reilly, Tony, Charlene, Melodie, Sheldon; Brittany, Courtney, Holly, Sydnie, Kyle; Kendra, Cody; Kiedis; Diesel and Haven: and by her loving sister Mabel and sisters-in-law, Dora, Sheila, Beatrice and Joanne; June Grettum, and many nieces and nephews. She was predeceased by her grandson, Christopher Cunningham, her parents and 8 brothers and sisters; Everett, Verna, Vera, Howard, Vernon, Eldon, Loren and Ray and her brothers-in-law, Mike Adams and Jack Hoar and sisters-in-law Nellie and Ayleen. She was truly a very special lady all of her life. We love her so and she will be dearly missed. Funeral services were held at 12:00 p.m., Friday, December 5, 2008 from the Norseman Inn with Rev. Brian Hunter (St. Mary's Hospital Pastoral Care) officiating. Inurnment followed in the Skafse Cemetery. Frances was truly a very special and lady all of her life. We love her so and she will be dearly missed. Memorial contributions are gratefully accepted to the charity of your choice.

A Memorial Tree was planted for Frances
We are deeply sorry for your loss ~ the staff at Burgar Funeral Home Camrose Ltd.
Join in honoring their life - plant a memorial tree
Online Memory & Photo Sharing Event
Online Event
About this Event

Share Your Memory of
Frances
Upload Your Memory View All Memories
Be the first to upload a memory!
Share A Memory
Plant a Tree