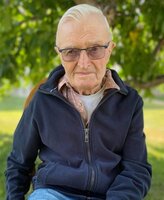 Alvin William Wolbeck was born on July 24, 1931, to Olivia and Arnold Wolbeck in Ankerton, Alberta, and passed away in the Galahad Care Centre on August 31, 2022.

Alvin had a farmer’s heart and enjoyed his passion until October 6, 2018, when he retired to Providence Place, Daysland, at the age of 87. Knowing the next generation of farmers were ready to take over made this process easier. Alvin was surrounded by many caring ladies in his retirement years, so when he had a chance to talk farming his eyes would light up discussing the price of cattle, the water levels in the dugouts or if Robert managed to get the beavers out of his pasture.

Alvin loved his family and had a very appreciative and kind nature. He always recognized what was truly important in life. Phone calls were never complete without a “thanks for calling” and visits never ended without a reminder to “come when you can.”

Left to cherish his memory are his sister Kathleen (Craig) Badry of Daysland, his niece Leah Badry and her daughter, Alvin’s great-niece, Kendra Badry of Camrose.

A Funeral Mass was held at 10:00 a.m., Monday, September 5, 2022 at St. Martin's Roman Catholic Church, in Heisler with Father Danial DSouza as celebrant.

If family and friends so desire, memorial contributions in Alvin's memory may be made to the charity of one's choice.