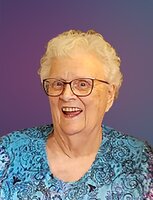 Grace Alaire Rott was born August 27, 1937, to Bill (William) and Janice Freadrich, in Winfield, Alberta.  She passed away March 20, 2022, at the age of 84, with her daughters by her side.  Grace was the oldest of three children, followed by two brothers, Allen and Glen.  They moved to the Forestburg area to start their small farm in 1945.  Grace attended school in Sedgewick. Following graduation, she worked at the Bank of Montreal in Forestburg, then went to Prairie Bible Institute in Three Hills.  From there she moved to Edmonton, to get her Certificate of Education at U of A, which at that time you could get in one year.  This was the time in her life she made it very clear that she was never marrying a farmer!

Grace’s first teaching jobs were in Edmonton, until 1961, when on July 1, 1961, Grace married Herbert Rott, one of the brothers from a neighboring farm back home.  They moved to Saskatoon, where Herb attended U of S for a short time, then took on construction jobs, while Grace stayed at home to raise their first daughter, Melody.  In 1964, they moved to Edmonton. Herb worked for Loblaws, and their second daughter, Glenda was born in 1965.  Grace stayed at home with the girls, and cooked and cleaned for the boarders they took in.  In 1967, Herb announced ‘he was fed up with city life’, and purchased a small farm in the Merna area.  Grace never really forgot her stance that she wasn’t going to marry a farmer; but she did her part, helping when requested.

Grace went back to teaching at the Merna school until they moved it to Forestburg.  She continued teaching elementary grades in Forestburg until 1977.   It was during this time a new member of the family was added.  Troy became the new little brother, joining the family at the age of 10.  Grace took a teaching position in Sedgewick, which meant all three kids were also now going to the Sedgewick School, from which they all graduated.

Grace retired from teaching in 1978, to take on the ‘Supervisor’ role of construction over their new house which was being built 2 ½ miles east of Killam.  It was then that Grace, also, took on volunteer positions at Flagstaff Lodge Auxiliary, Killam United Church secretary, as a typist for Church of the Nazarene and more.  She also became very involved in the Church of the Nazarene especially as one of the regular pianists and organists.  She was also requested to play for other events as required such as weddings and funerals across the province.  Grace tried hard to get her girls to follow her music aspirations, with piano lessons, various instrument lessons, and singing in church, but neither came close to her abilities.

Grace’s retirement meant more time for grandkids, cooking, sewing, knitting, crocheting, and any other craft that was a current hit.  All these interests were passed down to her daughters and granddaughters.  Anyone that has attended a meal in any of their homes knows there is going to be way too much food and they will roll out the door!

It was during one of Grace’s outings for more ‘supplies,’ that prompted the start up of her fabric store, Buttons ‘n Bows, in Killam.  This small business kept her very busy for the few years she had it.  It was the perfect setting for her sewing and crafting addiction.

In 1998, Grace and Herb sold the farm and moved to Olds.  It was here she continued to do all the hobbies she had enjoyed and perfected.  But, if there was opportunity, somewhat close to Olds, to watch a grandchild at 4H Achievement Day, or a grandson’s hockey game, she was thrilled to attend.  She became part of a little coffee group in Olds, and most mornings, there was no point in trying to call her, because she would be gone until noon.

After Herb passed away in 2019, Grace was finally convinced she should move.  She had lost her driver’s license, which of course, was all a conspiracy.  The girls had to take the keys away from her, since she thought she could make just a quick trip to Walmart without any harm being done.  It was arranged that she would move to an Independent Living home. The house in Olds was sold and Season’s Retirement home in Camrose became her new home.  She was adapting quite nicely to her new surrounding, became the residence pianist, and making her machine-embroidered cards again. She had a new purpose in life.  But this was short lived as she took a bad fall about six weeks after the move.  She broke her arm and ended up in the Camrose hospital.  It was then that the dementia really surfaced.  The stay in the hospital lasted for over three months and to add to an already difficult situation, COVID happened.

Eventually, Grace was moved to the Louise Jensen Long Term Care, where she resided until her passing.   She had her own schedule, that the staff soon had to adapt to.  As stated by one of the staff, “they didn’t poke the bear.” It became well known that she would NOT be attending breakfast at their scheduled time of day.  Her last few months she became quite weak and used a wheelchair to get around.  The dementia played tricks on her, and the family.  We owe a debt of gratitude to the staff at the Louise Jensen for their ability to handle each situation as it presented itself.

She is predeceased by husband, Herbert Rott, her parents, Bill and Janice Freadrich; her in-law’s Christian and Bertha Rott; her brother, Allen Freadrich; sister-in-law Marlene Freadrich; and brothers-in-law Melvin Rott and Clarence Rott.

If family and friends so desire, memorial contributions in Grace's memory may be made to the charity of one's choice.