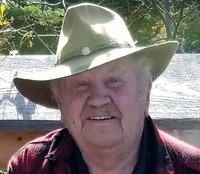 Ron – father, grandfather, and great-grandfather passed away on April 28, 2021, at Camrose, Alberta.

Ron, son of Herman and Margaret was born on January 9, 1934, in Macklin, Saskatchewan. He grew up on the family farm in Kelsey. In 1959 he married Janet Greenwall. They celebrated 60 years of marriage before her passing. Together they had five children and raised their family on the farm at Kelsey. In 1994 they retired to Camrose.

Ron was very musical and enjoyed many years of playing in a band and later playing alongside Brandon. As well as farming, he travelled many miles hauling gravel around the area. He was a huge supporter of sports, especially the Camrose Merchants and Camrose Kodiaks. He was active in the community and Church. He loved to travel and experience new things. His greatest joy was spending time with family and friends.

Ron touched many lives and will be deeply missed by his family and community.

A private family service was held. The Funeral Mass was live-streamed at 11:00 am, Wednesday, May 5, 2021, on the St. Francis Xavier Roman Catholic Church website https://stfxcamrose.caedm.ca/ and a recording of the funeral mass is available on the St. Francis Xavier Church website under "Recorded Masses". Interment will take place in the Camrose Valleyview Cemetery.

Anyone wishing to pay their respect may do so at the Camrose Valleyview Cemetery after 3:00 pm Wednesday, May 5, 2021.

If family and friends so desire, memorial contributions in Ron's memory may be made to the Heart and Stroke Foundation or to the Camrose Kodiaks Sport Development.