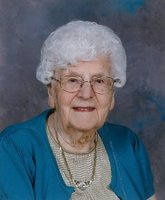 Marion Bennett of Camrose, Alberta, passed away on Saturday, April 3, 2021 at the age of 98 years.

Marion Bennett was born on a large dairy farm in Cheshire, England to Alice (nee: Bate) and Philip Pedley Walley, followed by four other siblings. When she was 12, her mother passed away and when her father remarried, three more siblings were born. With her teachers’ urging, her father allowed her to go to university, which she finished with honours during WWII. During the war, her father who’d been in WWI, welcomed Canadian soldiers to take their leaves on the farm, and one of these, David Lynn Bennett, she married in England April 23,1946. After teaching a year in England, she came as a war bride to Southern Alberta. Her husband, Lynn, worked as a farm labourer for the first year. Then the next year, she worked at the correspondence school branch in Edmonton while her husband took teacher’s training. Two children later, he graduated and they began teaching in small southern Alberta country schools: first Patricia then Cassils both near Brooks, then the junior-senior high in Picture Butte. The last 28 years she taught in Bashaw where her husband was principal the first 20. Between the two of them, they taught most of the high school subjects. She set up a French-language lab, put on school drama productions, took students on mountain holidays, did the painting when her husband built duplexes and four-plexes, and sponsored a Vietnamese family. Upon retiring, she took many courses at Augustana getting a third degree, travelled to countries in Europe with her husband, helped with such things as vacation bible school, and into her 90s, gave talks. She spent seven years helping care for her husband who had a stroke during which time they moved to Camrose in 1997. There she joined Messiah Lutheran Church where she gave many adult bible studies.

The family wishes to extend their gratitude to the staff of Crossroads, Bashaw Meadows and Camrose’s Memory Lane.

She was predeceased by her husband Lynn Bennett; four siblings Peter and Steven Walley, Rhoda Arden and Alice Wallworth; and niece Vicki Park.

A memorial service may be held at a later date.

In lieu of flowers, donations may be made in Marion’s memory to the David Lynn Bennett Memorial Award - endowment principal (this in the memo line) with cheques made payable to the University of Alberta (C/O Augustana Campus Attn: Bree Urkow 4901 46 Ave, Camrose, AB T4V 2R3).