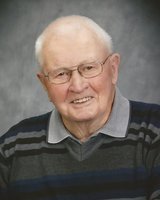 With great sadness, the family announces the passing of Donald Leo Sharkey of Camrose, formerly Duhamel, on February 18, 2021, at the age of 96. Born May 7th, 1924, from a farm upbringing with eleven siblings. Don started his own career with the Seed Growers Association and moved between Camrose, Coronation, and Duhamel. Returning to the Camrose area he managed Greenans in Wetaskiwin and Junction Service and Auto at the Hwy 21 Junction. He followed his love of mechanics and opened Dons Esso in Edmonton in 1960.

During his time in Coronation, he found the love of his life Crissie (Crystal Caseley), and married on his birthday in 1950. What a present! They were blessed with four children, Dwayne, Roddy, Jacqueline, and Michelle. Don worked extremely hard but also loved and cherished his time with family, friends, and community. Don loved sports and spent time playing baseball and hockey and umpired long into his later years. His kids would say there was no favoritism when dad was umpiring. Don and Cris were enthusiastic curlers and loved to go square dancing with friends. With Crissie working at WardAir they enjoyed many travels, and especially Hawaii. Don enjoyed a good party, loved cracking jokes and playing tricks on his friends and family. You always had to be on guard with Don around. When their grandchildren came along, they were always the priority. He found extreme joy in being a poppa and was always there when it came to rocking them to sleep or making sure their car was fit for the journey home. He loved spending time, passing on his tricks, and watching many of the sports they were involved with.

In retirement, Don and Crissie used their time to socialize with friends and family. Don remained involved in baseball, working with the Trappers and Cracker Cats in Edmonton until they moved back to Camrose in 2006 to West Park Village. Don and Crissie enjoyed their neighbors and many activities. Don was always a card shark and continued to play until his last days, he was always the luckiest guy at the table.  In the fall of 2019, Don was able to move into Bethany Meadows Assisted Living, where he lived until his passing.

Donald was predeceased by his son Roddy; siblings Bob, Margaret, Laura, Lawrence, Gordon, and Avis; and his mother and father, Arthur and Ada.

As per Don’s wishes, there will be no public funeral service.