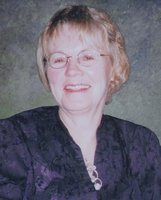 Mary Lou Bolding passed away peacefully on February 8, 2021, with her devoted loving husband Gerald Bolding by her side.  Mary Lou was born in Walton, Ontario to Margaret and Robert Kirkby on September 26, 1943. She spent a happy childhood growing up with her brothers, cousins, and close friends.

Mary Lou had many fond memories of summers spent: biking in Walton, riding horses, and swimming at Bare Bum Beach. Long winters were spent tobogganing, going on sleigh rides, and attending weekly dances with her family at local halls in Walton and Brussels. A special memory was attending harness races with her family throughout South Western Ontario as her dad bred and raced these magnificent animals.
Mary Lou was perhaps best known for her amazing laugh, quick wit, and sharp tongue.

She and Dede spent many happy years at the Country Nine Golf Course, golfing, barbecuing, and sitting around the campfire with a host of close friends and family.
Mary Lou was fiercely dedicated to her family and spending time with them was her greatest joy. Whether it was large family gatherings with the Easter Bunny in attendance, or attending her kids, grand, and great-grandkids sporting events, concerts, and recitals. She was perhaps best remembered for spending quiet intimate moments one-on-one. She had the beautiful ability to connect with you and only you during these moments. When life became particularly challenging she could be depended on to provide comfort and good practical advice, sprinkled with common sense. She always had your back and she was a woman who spoke her mind and said it like it is. She was a loving caring wife. An incredible mom.  An outstanding Grandmother and was especially proud when she was promoted to the status of GG Ma.

We love you Mary Lou, Mom, Grandma, GG-Ma and we will surely miss you!

A private family service was held. Inurnment has taken place in the New Norway Cemetery.

If family and friends so desire, memorial contributions in Mary Lou's memory may be made to the St. Mary's Auxiliary - Unit 2 Palliative Care.