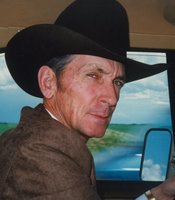 David Alexander Hutchinson of Camrose, Alberta, formerly of Duhamel, passed away on November 29, 2020, at the age of 86 years. David was born December 15, 1933 to parents Sandy and Laura Hutchinson, Dave grew up along the Battle River Valley with his three brothers Roger, Gerry and Lew and sister Connie. Dave loved the farming life and resided on the beloved Spruce Coulee farm until retiring to Camrose in November 2017.

It was on the farm that “Hutch” got his first taste for chuckwagon racing. Although his Grandfather Lew Hutchinson was not impressed that a young Dave hooked up the work horses and took them for a run, Dave would later go on to be a founding member of the Alberta Pony Chuckwagon and Chariot Association in 1968. Summers were spent racing throughout Alberta, and even in Saskatchewan and BC. Dave made many close friends on the racing circuit.

On October 23, 1959 Dave married Ruby Sheets of Ohaton. They had two children, Mark (1962) and Cathy (1965). Dave went to Mason City, Iowa to receive his Auctioneers training. In 1972 Dave and Ruby purchased the Daysland Auction Mart and spent the next eighteen years conducting the weekly Friday sales, and numerous farm sales throughout Central Alberta.

Due to Alberta Health Regulations, a private family service was held and inurnment has taken place at the Camrose Cemetery. When circumstances permit, a celebration of his life will be held.

Special thanks to the compassionate staff that provided care to Dave during his last few years of battling dementia: Dr. Valerie Smith and Stephanie Loosemore; the outstanding staff at Crossroads Day program: Tina, Karen, Shinji and his dance partner Cindy; Gail Heck and the Home Care staff that provided assistance; Connie Christenson for the weekly Wednesday road trips; and Dr. Slabbert, Susan Stockwell and the exceptional staff at Memory Lane.

If family and friends so desire, memorial donations may be made to the Battle River Community Foundation or a charity of one’s choice.