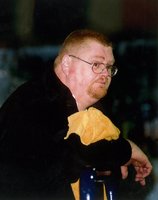 Michael Anthony Klug (Mike) of Camrose, Alberta, passed away suddenly on Friday, November 27, 2020, at the age of 52 years.  Mike was born March 1, 1968 to parents Tony and Noreen Klug.  He grew up in Camrose with his parents, sister, and brother.

Mike’s first love was hockey, he played goalie on his team growing up.  Later the Viking’s hockey team became the center of his life which led to two trips to Europe as the equipment manager.  He was very proud to be a Viking!

Following the time of the Vikings, Mike continued his presence at the rink and became a Kodiak fan.  He also loved being involved with minor hockey and helping out where he could.  He would spend the whole weekend volunteering at games as scorekeeper, penalty box keeper, players’ box doorkeeper, and even announcing.  Mike cheered on and gained the respect of generations of hockey players.  He was never more at home than when he was at the rink with his hockey family. Mike enjoyed working at different places like the Co-op, Walmart, the Norseman Inn, and DD Sales, just to name a few. When he wasn’t working, or at the rink, he could be found at whatever event was happening in the community.  He loved to be a part of the Camrose community helping and volunteering for multiple organizations.

Due to his health problems he got to know many people in the medical field. From Camrose to Red Deer to Edmonton to Wetaskiwin he knew them all by name.  He enjoyed talking to people and most times you could ask someone in the hallway where Mike was and that person would know.  He engaged with all. Mike was kind and thoughtful. He loved people, he loved life, and he loved to tell jokes.

Left to cherish his memory are his brother Scott (Angela) of Denver, Colorado, and their children Payton and Andrew; as well as, much of the Camrose community.

Mike was predeceased by his mother Noreen; sister Janice; father Tony; and his ever-loving Grandma Klug.

Due to Alberta health regulations, a private family service will be held.  When circumstances permit, a celebration of his life will be held.

We want to thank all the health care professionals that cared for and watched over him through the years, from home care to physicians to hospital and dialysis staff. A special thanks to all those who have shared their memories of Mike, on the tribute page, Facebook, telephone, or in passing.

If family and friends so desire, memorial contributions in Mike’s memory may be made to the Kidney Foundation, the Camrose Food Bank, or to a charity of one’s choice.