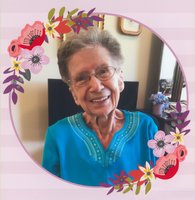 Hertha Maria Brosinsky of Camrose, Alberta, passed away on Friday, November 29, 2019 at the age of 99 years.

Hertha Maria Brosinsky was born on August 6, 1920 in Bad Ischl, Austria to Charles and Marie Semrad (nee Kump). Hertha and her mother came over by ship, the Cleveland, when Hertha was ten years old. They landed in Halifax on March 22, 1930 and traveled by train to Edmonton where they met her father who was already residing in Canada. They lived in St. Michael and then moved to Hairy Hill where she completed her schooling. Hertha went to Normal School in 1943 in Edmonton and studied to become a teacher. She taught elementary grades. While teaching school in the Hairy Hill area she met Herman “Harry” Brosinsky who was a station agent for the CPR. They then married in Picture Butte, Alberta in 1951. They had two children, Glen (Marg) and Donna. She has two grandchildren, Sean and Michael Brosinsky. With many moves for Harry’s job they lived in numerous towns (a total of nine) throughout Alberta and she continued her teaching career until 1973. Their final move was to Camrose, where they lived for over forty years.
Hertha loved gardening, crocheting and knitting. She knitted and crocheted baby blankets, children’s sweaters and loved crocheting doilies which she donated to charitable causes and were treasured by her many friends and family. She was also a great cook and had many specialties that her family loved and looked forward to at family gatherings.

She was loved and well-tended in the two Camrose care facilities until her passing at just over 99 years of age. She was a wonderful friend to all that knew her and will be dearly missed by everyone.
Left to cherish her memory are her son Glen (Margaret) Brosinsky of High River; daughter Donna Brosinsky of Camrose; and two grandchildren Sean and Michael Brosinsky of Calgary.
Hertha was predeceased by her husband Harry.

If family and friends so desire, memorial contributions in Hertha's memory may be made to the Alzheimer Society of Alberta.