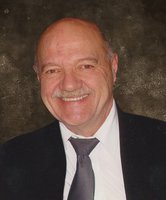 Greg Thirsk was born on February 5, 1947, the second son of Pearl and Bob Thirsk, at New Westminster, B.C., when his parents were spending the winter there.

During his school years at Rosalind, Greg excelled at sports, especially track, baseball and football. Later, when he went to the Camrose Lutheran College and Camrose Composite High School, football became the highlight of his life. He later played junior football with the Edmonton Huskies for three years. His dad, mom and sisters Valerie and Pat were proud spectators at every home game. After the games, they enjoyed picnics in Kinsmen Park.

Greg worked for Edmonton City Telephones for thirteen years. While there he met Ginette Bedard, a French-Canadian girl from Charlesbourg, Quebec. Prior to her marriage to Greg, she was a stewardess with the Canadian Armed Forces. Greg and Ginette were married on October 24, 1970. They have two sons, Michael and Mark.

Greg, Ginette and the boys left the city in 1979 and made their home at Kelsey. They lived on “The Kelsey Place” (the Wesley Thirsk home farm). They built a new home on this location. Greg was involved in the seed growing and cleaning with his father, brothers, and brother-in-law on Thirsk Farms.

In 2007, Greg retired from the farming operations. He then bought his favorite toy, a white Harley Davidson touring motorcycle, on which he accumulated 99,715 kilometers.
In 2017, Greg and Ginette moved to Camrose into their lovely retirement home.

Left to cherish his memory are his loving wife Ginette; children Mike (Cindy) of Rosalind, and Mark (Jackie) of Camrose; four grandchildren; one great-grandchild; and siblings Theo (Margot) of Kelsey, Valerie (Lloyd) Herder of Kelsey, and Pat Thirsk of Kelsey.

Greg was predeceased by his parents Robert and Pearl, and brother Hugh.

A Funeral Service was held at 11:00 a.m., Thursday, September 5, 2019 from the CityLights Church Camrose. Interment has taken place in the Melville Cemetery.

If family and friends so desire, memorial contributions in Greg's memory may be made to the Melville Cemetery Fund, STARS, or KidSport Camrose.