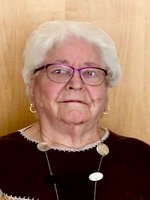 Caroline "Carol" Theresa Blatz, daughter of Wilhelm and Mary Lorenz was born on a farm near Bodo, Alberta on May 29, 1926. On November 16, 1948, she married the love of her life, Ethelbert (Bert) and together they raised their six children, two sons and four daughters. Angels took her to her heavenly home on March 22, 2019.

The Family would like to extend a special thanks to Dr. Morrow and the staff at the Louise Jensen Care Centre.

If family and friends so desire, in lieu of flowers, memorial contributions are gratefully accepted to STARS, or to the Louise Jensen Care Centre.