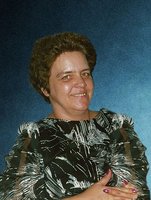 Carol Ellen Hein of Red Deer, Alberta, formerly of Camrose, Alberta, passed away on Wednesday, January 9, 2019 at the age of 56 years.

Carol Ellen Hein was born on April 12, 1962 in Edmonton, Alberta. She was the third of six children born to Reinhold and Sarah Hein. Carol spent the majority of her life raising children. She had her daughter Tina Marie Hein on August 28, 1984, James William Hein on June 1, 1986, and Michael James Hein on April 7, 1987.
She lived in numerous communities, but made Camrose her home. Carol enjoyed spending time and doing many things with her family including going to hockey games, camping, parks, watching movies, and playing cards. Her favorite pastime was cross-stitching which she learned many years ago. She mastered it and could cross-stitch absolutely anything you wanted. She would make the most memorable ones for special occasions such as birthdays and weddings. Carol had a way with children, so much so, that she enjoyed babysitting her nieces and most recently her seven grandchildren.

A funeral service was held at 2:00 p.m., Wednesday, January 23, 2019 from the Burgar Memorial Chapel, 4817 - 51 Avenue Camrose with Rev. Brian Hunter officiating. Inurnment will take place at a later date.

If family and friends so desire, memorial contributions in Carol's memory may be made to Alberta Lung Association.